Best Folder Encryptor is a professional file and folder encryption software. It features superfast with high security and confidentiality. With advanced encryption algorithms, the encrypted files and folders cannot be decrypted without the correct password, and are prevented from copy, deletion and movement. 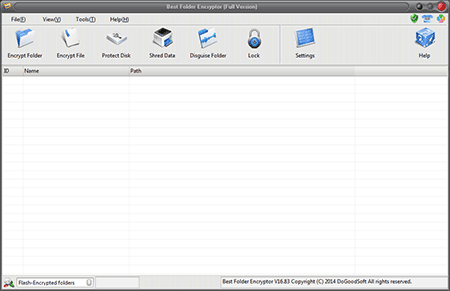 Folder Encryption: Encrypt a folder with five methods.
Flash Encryption: Encrypt folders stored on your computer and external hard drive instantly without size limitation. The encrypted folders are prevented from being copied, deleted and moved.
Hideing Encryption: Hide your folders instantly without size limitation. The encryption speed and effects are the same with Flash Encryption. The hiding encrypted folders cannot be seen and decrypted except in Best Folder Encryptor.
Full Encryption: Encrypt all files in a folder at one time with the internationally mature algorithm. Just open the file you want to use and enter the correct password. It's very convenient and safe.
Diamond Encryption: Pack and encrypt a folder into an encrypted file with internationally mature encryption algorithm.
Portable Encryption: Pack and encrypt a folder into an executable (.exe) file with internationally mature encryption algorithm. You can encrypt important files and folders with this method, and then send it over the network or by other means to be used on a machine where Best Folder Encryptor is not installed.


File Encryption: With the advanced algorithm, your encrypted files reach really super high security. They are faultless and cannot be decrypted without the correct password. It also supports Temporary Unprotect. When using an encrypted file, enter

Disk Protection: Protect disk partitions on your computer with three protection levels. Disk with the advanced-protection cannot be found in any environment except in Best Folder Encryptor.